We’ve come to the 12th and final week of our Mystery We Write Blog Tour. For the last three months top notch authors have shared writing tips, personal glimpses into their lives, and fascinating information on how each crafted her stories.
A million thanks to each writer who has shared her life, books and talent with my readers and me. It's been a fun ride and I've learned to admire and love these talented artists.
﻿
﻿
I first came to know Sharon when we worked together on an anthology CHIK~LIT FOR FOXY HENS. This was my first published work, but Sharon had already been selling for some time. We learned that we shared a love of mystery and all things mysterious.
WHAT IS VOICE?
By Sharon Ervin
A writer’s voice is her writing style.
Individual writers have a rhythm, a cadence. Some are jolting, startling, stimulating. Others lull and are recommended as bedtime reads.
Currently, I enjoy books by David McCullough. His voice works for me, and for millions of others. Also, I love Dorothy Sayers mysteries, written in the 1930s. Her cadence and her word choices massage my brain. Oddly, when I refer others to these two great, very different writers, their work does not appeal to everyone. What is that about? I came up with an analogy to explain differences in voice.
Imagine you are the passenger in a large luxury car traveling with friends along a smooth interstate highway. The car is the story’s plot, expansive, comfortable. The friends are the story’s characters. The roadway is the voice, smooth, rhythmic.
The car turns onto a rutted gravel road. You brace yourself, resisting the bumps and jolts. You are still in the same vehicle with the same charming company, but you are ill-at-ease. The surface (voice) is a rub board that steals the enjoyment from the trip for you. Others in the car either don’t notice or enjoy––are even stimulated–by the rougher ride.
I read a romance novel once by a well-known writer. The premise (plot) was really good, the characters well-developed and compelling. But the writer’s voice lurched, tossing me one way, then another. The story was so good that I slogged through to the end, annoyed with myself and with the author the entire time. Relieved to be finished, I felt as if I had been roughly treated by the erratic voice. But the characters haunted me.
Two weeks later, certain that my disregard for the author had more to do with me and my attitude, I read the book again. It was as ragged as I thought, yet I still loved the plot, the pace and the characters.
Three weeks later, unable to stop thinking about it, I picked up the book again, this time to edit the pages, to mark the awkward places in the jolting text. There was too much.
I stewed some more, then, Eureka! I decided to rewrite the book the way it should have been written in the first place. It didn’t matter if I plagiarized because no one else would see my version. Maybe rewriting would allow me to come to terms and let it go.
As the story reeled onto the pages, however, it was not a copy of the original, but my own. I gave the motivations more substance and realized the characters’ responses to weak provocation was part of my annoyance. My concerns about plagiarism vanished with the realization that, like writers through history, I had breathed in an idea––a premise––and exhaled a brand new work.
COUNTERFEIT COWBOY became my third published book. I no longer had concerns about similarities. Even the author of the other book would not have seen a resemblance.
COWBOY won fourth place in the First North American Fiction Contest that year. A New York Editor called after she read three chapters thinking it could fill a slot that had suddenly opened up in her schedule. I didn’t believe the manuscript was polished enough for her. Three weeks later, when I thought it was, the slot was filled. COWBOY, however, did get published eventually.
Not long ago, I reread the other book. I still have it, of course. As before, I stumbled along, skimming over the especially tedious places. The author is well-known and well-liked.
Some readers like my work, too.
The cadence of my own writing voice suits me. The talent, inborn, has been shaped and polished by critique groups, creative writing classes, workshops, conferences, and editors. Some of those like my voice; others, not so much. I enjoy what I write, so I’ll keep on keeping on. That’s what I recommend to all writers.
Listen to that unique voice within you. Savor it. Develop it. And enjoy the ride.
~~~~~~~
CANDLESTICKS is Sharon Ervin’s ninth published novel, the third in the three-book Jancy Dewhurst series. Seven of her early books are now available on Amazon Kindle. 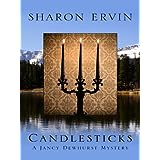 Jackie King
Posted by Jackie King at 12:00 AM 8 comments:

TAKE A BIRDSEYE VIEW INTO MYSTERY WRITER PAT BROWNING’S LIFE!
The following article by Pat Browning, gives us an in-depth view of this top-notch storyteller’s struggle to create her books, including ABSINTHE OF MALICE. I found “Two and a Half Books,” fascinating, and I think that you will, too. 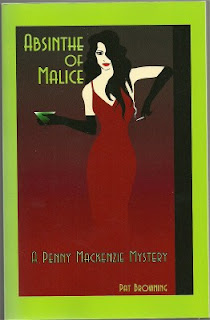