Today it’s my pleasure to present F.M. Meredith, also known as , who is the author of over thirty published novels. Her latest in the Rocky Bluff P.D. crime series, from Oak Tree Press, is No Bells. Rocky Bluff P.D. is a fictional beach community between and and F. M. once lived in a similar beach area.


When I wrote Final Respects I had no idea it would be the first in a long-running crime series. My goal for that book was to write something that showed what happened during a police officer’s job affected the family, and what was going on with the family affected the job. I also wanted to show that the officers and detectives worked on more than one case at a time. Of course once I was done, I knew I had to find out more about these characters who had become so real to me and I’ve continued with that same goal.


Because when I wrote that first book, I didn’t know nearly as much as I do now, I picked names that I liked for each character—which is okay, but I didn’t pay attention to other rules that I’ve learned along the way.


Unlike some writing rules, these were easy to understand and made sense.


For the main characters, pick names that don’t begin with the same first letter. I goofed right off the bat with this one. One of my ongoing characters is Doug Milligan and as time goes on, he becomes a detective and partners with Frank Marshall. So now I’m stuck with Detectives Milligan and Marshall—which could become confusing to some readers.


When picking names, you want them to fit the characters. Gordon Butler has appeared in several books now, but when I first created him I had no idea how important he would become. The message here, perhaps, is consider each character important when you are thinking up their names.


Where on earth do I find names to choose from? Some authors say they use the obituary columns. Others go online and search names for babies. And of course, the Internet is also the perfect place to find ethnic names. What I like to do best is save graduation and play programs and pick names from them. Of course mixing up first and last names.


If you’re writing a historical piece, be sure and pick names that fit the period.


One of the names of a main character in No Bells is the real name of someone I know, Benay Weiss. Yes that’s her first and last name—of course she’s nothing like the character I named her after. I ran a contest in another blog tour for whoever commented on the most blogs would have a character named after him or her. Benay’s daughter entered the contest for her mom and won. I’m anxious to hear what she thinks about the book and her namesake. And by the way, I love the name.


You can read more about Benay in No Bells.


Officer Gordon Butler has finally found the love he’s been seeking for a long time, but there’s one big problem, she’s the major suspect in a murder case. 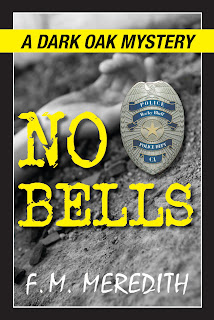 
CONTEST NOTE FROM F.M.: The person who comments on the most blogs on my tour will win three books in the Rocky Bluff P.D. series: No Sanctuary, An Axe to Grind, and Angel Lost. Be sure and leave your email too, so I can contact you in the event you are the winner.
Posted by Jackie King at 10:52 AM 11 comments: