The Birthing of NO ESCAPE: The Sweetwater Tragedy

Jean Henry Mead's new historical novel, NO ESCAPE, is ready for downloading now! Today, the author tells how this book came about. Read her riveting account of "Cattle Kate's" courage. If you love mysteries, history and strong women, this is the book for you.


No Escape, the Sweetwater Tragedy


I was researching a Wyoming centennial history book during the mid-1980s, by reading old microfilmed newspapers dating from 1888. During that time I read about a young woman named Ellen Watson, who had been hanged by cattlemen along with homesteader James Averell. The cattlemen who hanged them claimed that the pair had been operating a rural bawdy house and taking cattle for Ellen’s services.


After her death, the hangmen labeled Ellen “Cattle Kate” and vilified her by claiming that she was not only a prostitute but a cattle rustler. The Cattlemen’s Association, headquartered in Cheyenne, controlled a local newspaper and reports of the hangings were published worldwide, resulting in considerable condemnation that a woman had been hanged, despite the cattlemen’s claims.


I was curious when I read the 1889 newspaper reports, when the murders took place, and decided to write a novel about them, someday. A number of authors had written about the hangings from the cattlemen’s point of view, and films have been produced, portraying Ellen as a pistol packing outlaw. But that didn’t jibe with news reports from the Casper Weekly Mail, which published James Averell’s “letters to the editor,” complaining that greedy cattlemen were gobbling up all of Sweetwater Valley, so they could graze their cattle on government land, without paying for it.


I researched the story intermittently over the years but pieces of the puzzle were missing until George W. Hufsmith was commissioned to write an opera based on the hangings. He was hooked on the story and spent the next 20 years interviewing residents of Sweetwater Valley, Wyoming, who had knowledge of what had actually happened. Thanks to Hufsmith’s nonfiction book, I was able to write my novel. I dedicated the book to him. 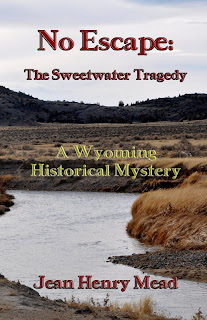 Thanks Jean, for the background to your new and exciting novel.
And thanks to our readers for dropping by.
Jackie King